Fort Point was an artillery battery that was built in 1779 to defend Liverpool against American Privateers that had been marauding the Nova Scotia coastline.  The Fort protected the town through the American Revolution and on through the War of 1812.  As the 1800s moved on, it became a gathering place for the townspeople. The town prospered during the Age of Sail. Fishing, shipbuilding and exporting timber turned it into  a major seaport, at one time second only to Halifax.

The harbour was so busy that ships could be tied up 3 deep at the wharves.  Though a lighthouse had been built on an island at the mouth of the harbour in 1815 to mark the harbour’s entrance, a harbour light was requested to help guide the ships in safely and manage the heavy traffic. In 1855, the Fort Point lighthouse turned on its light and Fort Point continued its tradition of protecting the harbour. Sitting at the edge of town, the keepers at the Fort Point Light didn’t have to worry about isolation, which was a fact of life for most light keepers and their families, but the lighthouse itself was tiny with regards to living quarters. The first keeper actually lived in town because of this. 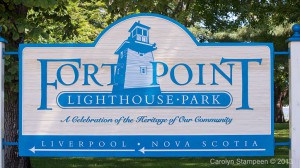 The lighthouse is 3 stories. The lantern sits on the top floor; supplies and lamp oil used to take up the ground floor, which left the middle floor for the living quarters. A kitchen was added onto the side of the building at the turn of the century to make the accommodations a bit friendlier for the families that would live there.

The first light consisted of 3 brass oil lanterns magnified by  silver-plated reflectors. In 1901,  a hand-cranked foghorn was installed, with remained in used until 1951. Keepers were paid extra for this new duty.   In 1951, an electric light was installed and the lighthouse was automated.  It was the end of the era of light keepers.

Times continued to change.  Radar and other technological advances eventually made more and more lighthouses moot. Fortunately, the town had already grown attached to the Fort Point Light as a local landmark and had already begun helping with its maintenance. 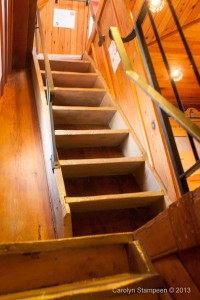 In 1970, Liverpool had acquired the land around it for a park and when the inevitable came in 1989 and the Fort Point Light turned out her light for the last time, the lighthouse  was saved the fate of many other decommissioned lighthouses. Rather than being demolished, it was acquired by the province. The Fort Point Light survives and remains today as one of the oldest surviving lighthouses in the province and a tribute to the community’s past.

Today, there is a gift shop on the ground floor, and visitors can climb up the steep stairs to the light and its sweeping view of the harbour. On the way, you’ll pass through the 2nd floor, which is really a highlight of the exploration.  This lighthouse won’t be the tallest, most remote, or most dramatically situated lighthouse that you’ll see in Nova Scotia, but the video presentation by a son of the last keeper recounting his childhood memories of growing up here, a part of  the life of the family charged with the safety of the ships moving around the harbour,  hearing first-hand the life of a bygone time, is a true treasure. One sits to hear one story out of curiosity, then stays for another story, then another… As you sit there, imagine a family of 5 living in the room.  Then imagine them spending 4 years during the 2nd WW all living in the kitchen on the first floor, while weather forecasters took over the second floor (they were only supposed to stay a month!). Imagine a little boy taking the initiative to guide an unexpected ship into the harbour one foggy day when his father had been called away. Walking around the grounds you can read interpretive signs and enjoy the park. This whole area is steeped in history. The local Tourist Bureau is well worth a stop.  A knowledgeable local can direct you to any of a number of local museums, talk about the privateer history, can hand you a map of a walking tour of historical homes, let you know the tide schedule.  There is a lot of history, culture, beautiful architecture and charm in this fishing community and our only regret at stopping here is that we didn’t plan more time. 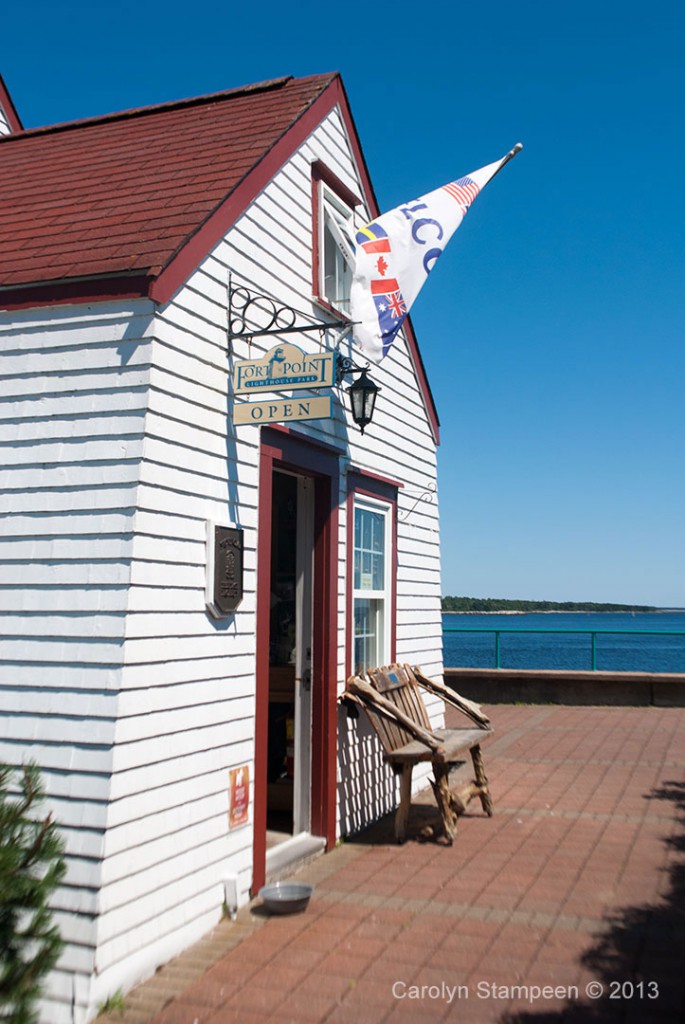 You may also be interested in our Fort Point Lighthouse Nova Scotia travel video. This entry was posted in Harbour, History, Lighthouse, Travel video, Video and tagged Liverpool, Where to go in Nova Scotia. Bookmark the permalink.