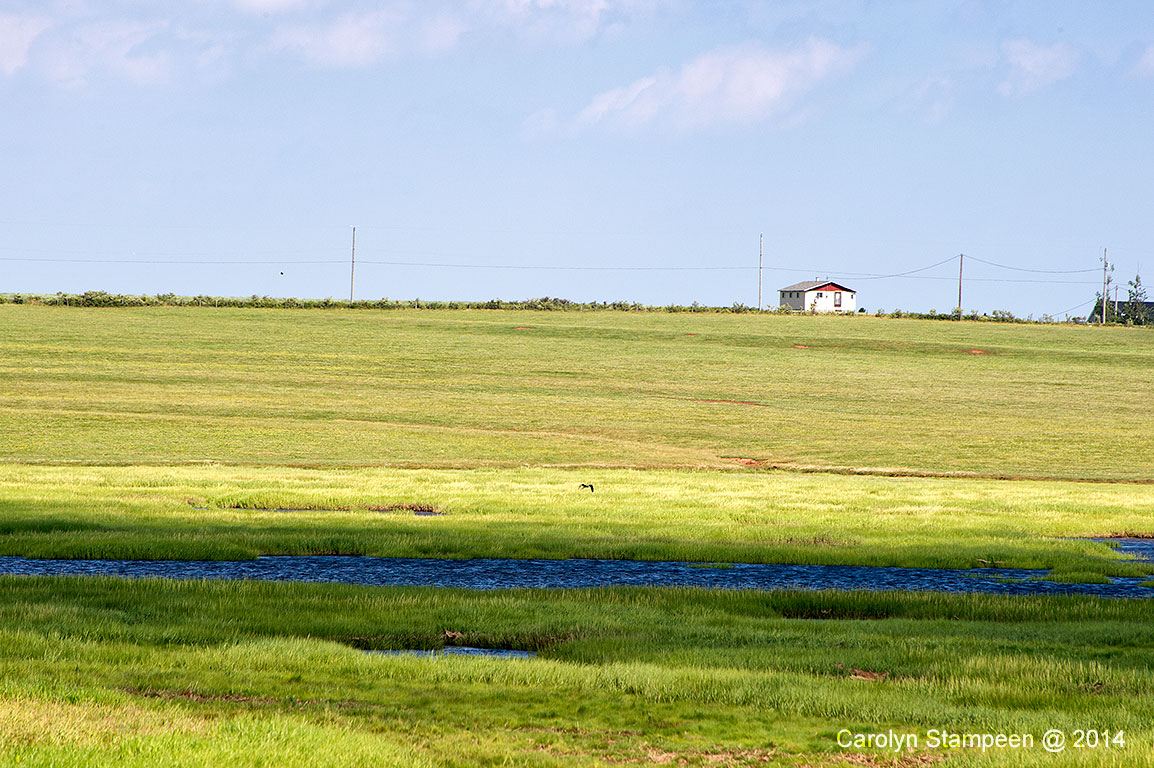 “This is hard!” the fellow said, getting a little frustrated.

For a change, I was behind the wheel and he was in the passenger seat, pointing the camera and trying to shoot scenery from a moving car. He had it easy. Unlike him, I slow down, as traffic permits, when I see him pointing the camera at something. That’s just a “wee” bit different from his typical response to me when he’s driving and I’m bemoaning missing an amazing view because of his driving. “I’m making you a better photographer!” he claims.

He’s now learned a whole new appreciation for the in-focus, sometimes decently-composed shots that I end up with. And me? As someone who doesn’t easily just sit and do nothing as a passenger, car photography is a perfect way to make use of otherwise wasted time. 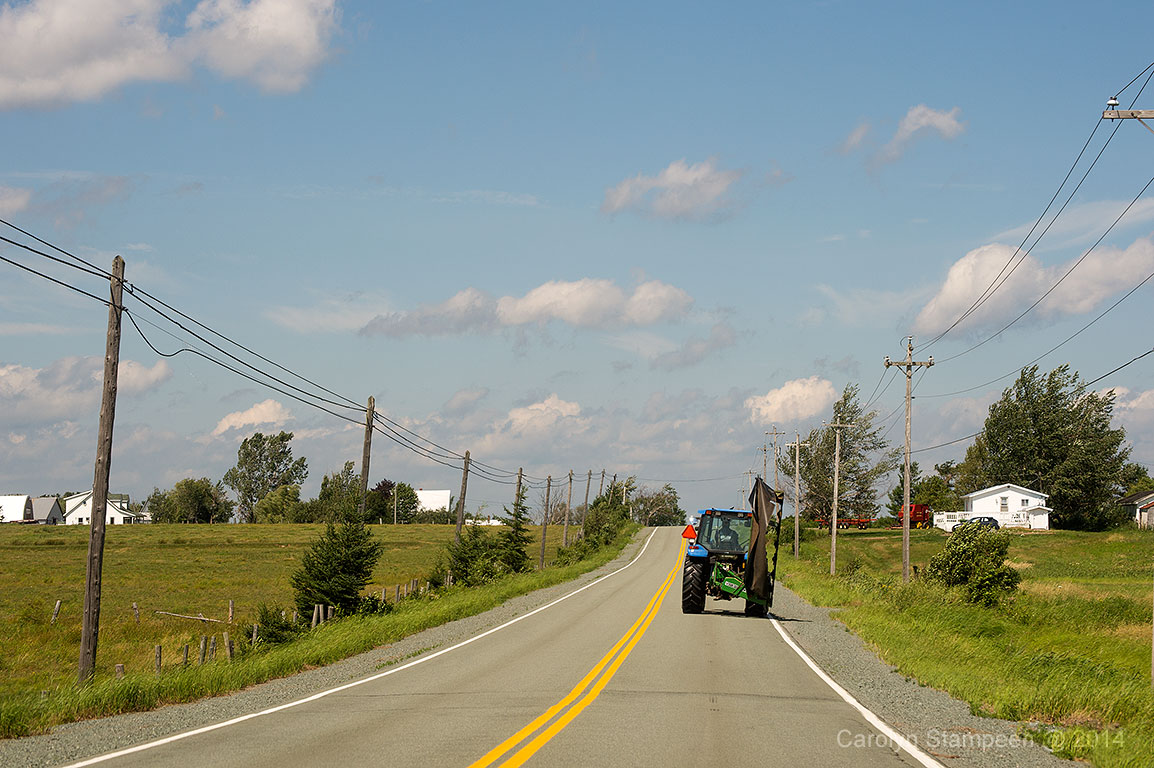 What is a drive through the countryside without getting stuck behind a farm vehicle at some point?! Typically farmers will pull far to the right to let traffic pass them, as conditions permit.

Taking a photo from a car doing highway speeds can be challenging, but it’s very doable.  It means reacting extremely quickly to a scene, hoping that the road stays smooth and that a pole or tree or some other obstacle doesn’t get in the way. Perspective changes very quickly and the perfect composition from here might completely fall apart by the time the camera is pointed and the shutter is clicked. 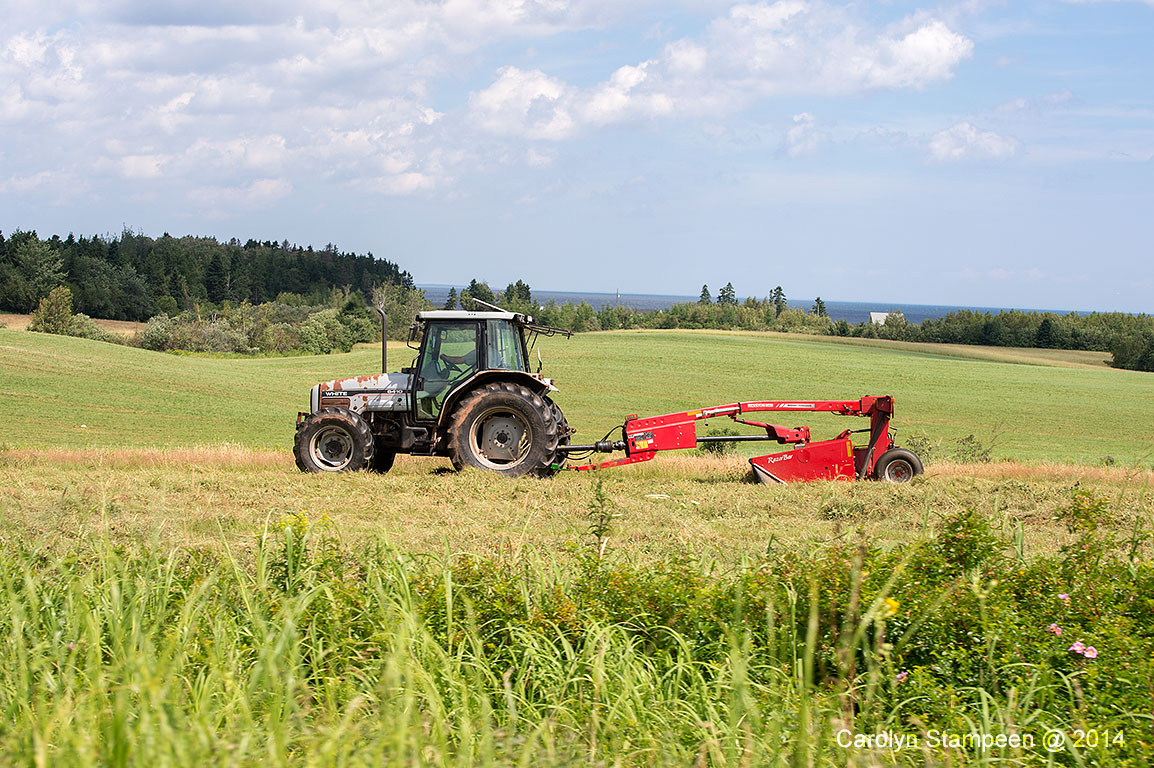 This farmer is bringing in the hay. A couple of photos turned out; a bunch have the tractor obscured by shrubs or trees.

It can be a fun a challenge, though, and does train one to be observant and react quickly, honing instinct instead of thought process. Success rate depends on how smooth the road is,  how many trees and other obstructions line the road and how much time one takes to decide to pick up the camera and point. In this part of Nova Scotia, farms often butt right up along coastline. 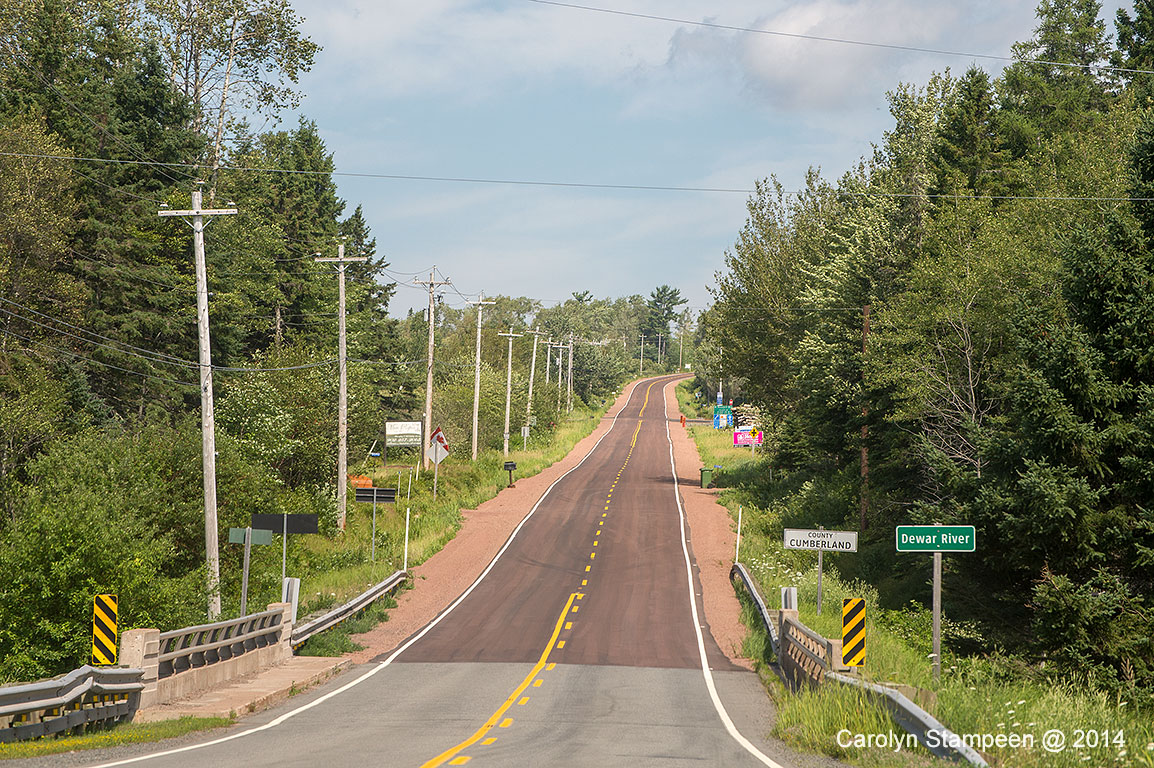 The county line marks the beginning of a lovely, new stretch of highway.

The window glass can affect the colours of the image. Even if you don’t notice a tint with your eyes, assume one is there.  It may help to have your camera set to auto white balance, but if you notice an image looking “off,” it can be fixed in post using photo editing software.  I like to open the side window to avoid this problem for side shots, though that is not without its hazards.  Recently, I had my camera pointed out the window when my hand felt something hit, followed by a gush of liquid – we ran into a bug.  Since we were going 110km/hr (this was New Brunswick, where this is a legal speed), it wouldn’t be right to say the the bug hit us. Regardless, a big, huge, yuck to the liquified result!

Speaking of bugs and yuck, often windshield wiper fluid and wipers aren’t enough to remove smears and splats, so I take advantage of every gas stop to clean the windows. While the camera can focus past small dirt on the window, those splats can affect focus and can be visible in the image.

I also like to have the camera strap around my neck, just in case. 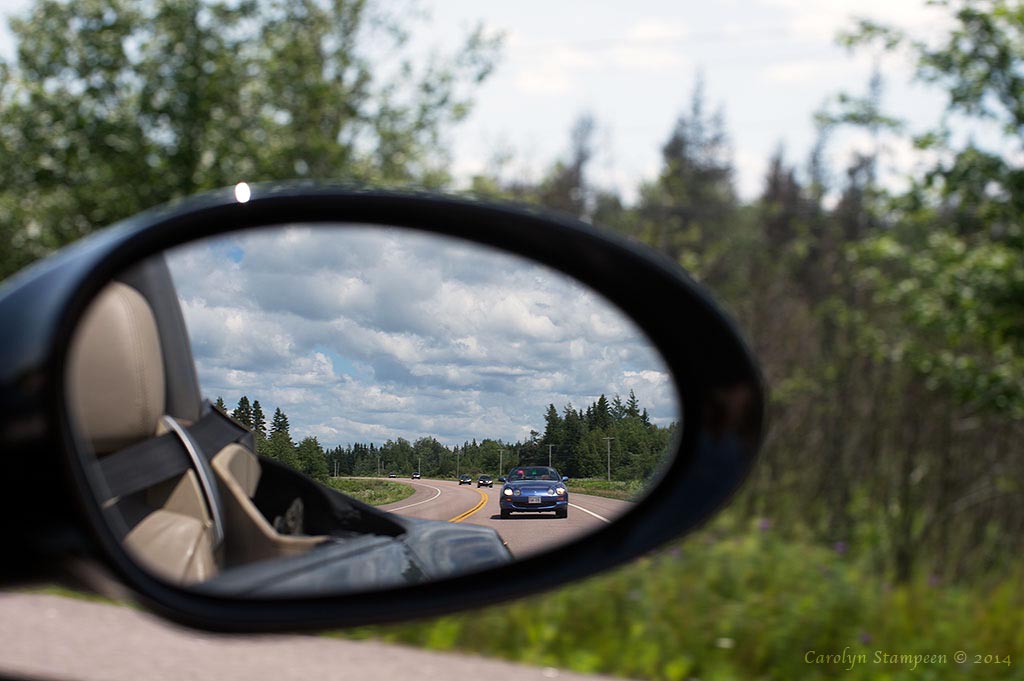 Sometimes it’s fun to shoot what’s behind you! It was shortly after this that I experienced what it felt like to be a windshield, but that didn’t make the scenery any less pretty.

The photographer has no control over the car’s speed, so planning the shutter click between trees can be tricky.  I find that it can be very useful to shoot in burst mode in some situations to improve the odds of getting a shot without an obstruction and to allow quick correction should the car hit a bump or unexpectedly swerve.

If you are shooting between trees and you are using the autofocus, you may find it difficult to focus quickly, as the camera will grab the closer trees before trying to find the parts of interest past them, so consider switching to manual focus if that’s a problem. This highway has a lot of hairpin curves as well as ups and downs as it wends along the coastline. We hit a bump as I clicked the shutter, but I like the shot anyway. Trees, trees, trees, with the Bay of Fundy frequently visible. This is not a highway to drive on a low tank of gas and one shouldn’t rely on cell service.

If you see a scene coming up that you think might be worthy of a photo, don’t stop to think.  Point the camera and be ready. A split second can make the difference between getting the shot or not.

Reflections can be a problem at times.  If you see your leg being reflected in the window, for instance, assume that your camera can see it as well. If you can’t roll down your side window, try changing the angle from which you are shooting.  Placing your lens right up to the window can help, but be careful.  If the car hits a bump, you may be hitting the window with your camera.  One way to help is to put one of your hands around the lens and have it be the contact between the lens and the window.  Front window glare? If you have something dark, such as a sweater, jacket, or towel, placing it on the dash will help cut reflections. Yes, I love hay fields, but what makes this one unique is that the hay bales are old-fashioned rectangular bales. While once the standard, these are now a very rare sight around here.

Some scenes can only be recorded from the car, as there may be no safe place to stop. Many country roads in Nova Scotia have negligible to non-existent shoulders and along the coastline, there are so many twists and turns that it’s unsafe to stop the car — don’t be “that” person who causes or almost causes an accident to take a pretty picture.

The best part of highway photography: you’re shooting digital.  Have fun! Practice! Look for the pretty, the unusual, the interesting and the unexpected.  A lot of shots will fail, it’s just a hazard of method, but you’ll eventually get some cool shoots of the countryside, towns or cities through which you’re passing. As the passenger, of course. Have you seen highway lines being painted before? Kids looking up from their work in a field somewhere in the Annapolis Valley. What every driver loves — being held up by road work. But…a camera in hand makes the wait more interesting! This was shot in PEI. Apparently there is a beach on the other side of the boardwalk. There is a beautiful recreational trail along the St. Lawrence River around the La Pocatiere area. It affords a beautiful view of the river and the opposite shore. There are usually some very photogenic clouds here and on this day, I was lucky that there were a number of people walking and biking the route.

This entry was posted in Scenic drive and tagged Nova Scotia highways. Bookmark the permalink.