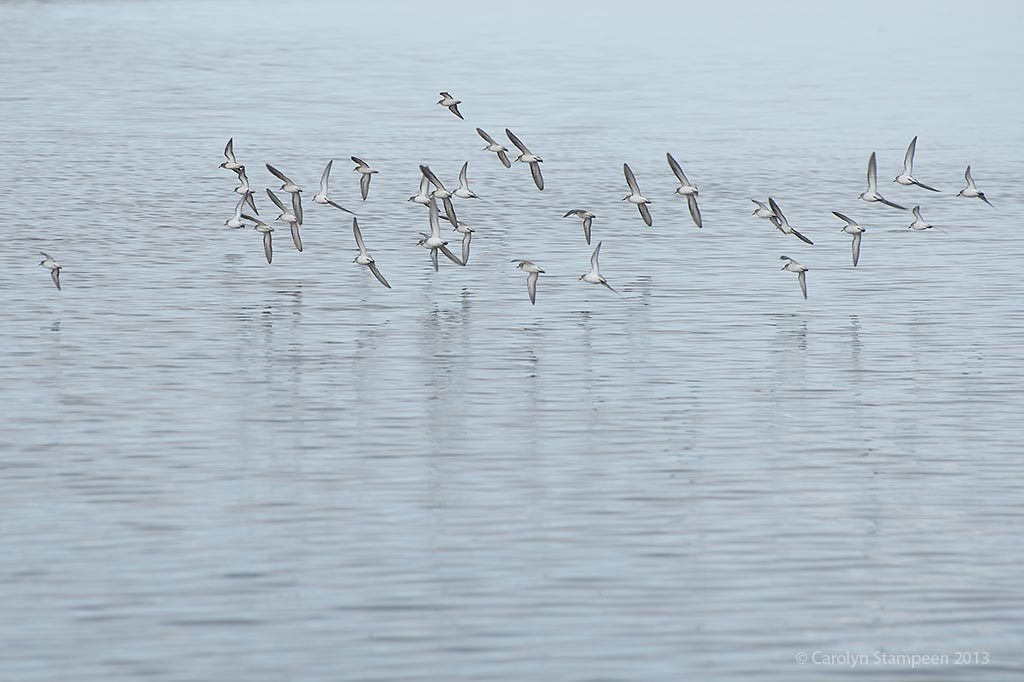 Beaches … birds, right?  If you are looking for birds, Nova Scotia won’t disappoint you, beach or not.  A great resource to help you know what’s around the areas you are visiting or to find birding hotspots is the Peterson’s Bird Guide app — this isn’t the only birding app available, but it’s one I love.  Not only do you have a mobile reference at your disposal, but you can go to their website for extra information to either view on the web or load into your app. Click on Bird Finder and click on Birds by Hotspot or Birds by County.  Canadian provinces have been added! For beach birds, you’ll want to make sure you also have a local tide table on hand.

We have a cottage on the Northumberland Strait, where the photos in this post were taken, and the tides on our beach go out a long way. I know what part of the beach will be last to fill with water as high tide returns, which can be useful knowledge.  Birds that feast on critters in the sand during low tide may be scattered across the flats.  As the water comes it, the waterline herds the birds before it and concentrates them in that last part of “dry” land. If I happen to be sitting on the beach at this time, the tide will helpfully shepherd the birds towards me, which often allows me to get much closer to them than if I had been trying to stalk them.  Birds aren’t blind: unless you are in a blind or have a really long lens, being still and letting your subjects come to you is a great way to get close.  Some birds are more shy than others, and this may be a location thing as well as a species thing, so your mileage may vary. Make sure that your battery is charged, your card is empty and that you have quick access to change either.  And don’t be afraid to get dirty or wet! Laying on the beach allows you to get eye level shots of your subjects and also keeps your profile reassuringly low for them – just make sure that you are able to keep that camera dry!

A very important note if you are not familiar with coastal life — know the tides of the area!  Water will likely come in faster on certain parts of the beach, depending on various drop-offs along the floor.  Take especial care along the Bay of Fundy, which has the highest tides in the world, and where water can come in much faster than expected. When I am to a new beach, I like to head out as the tide is still going out, know when low tide is and pay attention to water levels and my watch as the tide comes in. On the beach I was shooting here, I know that “Crab Island,” as the locals call one point of land, gets filled before the flats and if I let the water cut me off, it means walking on the sharp rocks close to the edge of the shore at that part of the beach rather than the delicious-feeling sand further out, and walking in water much deeper than I’d be comfortable with while carrying a camera. And this is not a bad scenario — there are places where one might find oneself in water that is over one’s head, with a less friendly coast, so be smart and be safe! Sometimes it’s not all about being close, or, if you can’t get close, you have an opportunity to take a shot of the bird in its environment.  I love the texture, patterns and colours of the water in this shot. Foam is coming in with the tide as this yellowlegs wades looking for dinner. 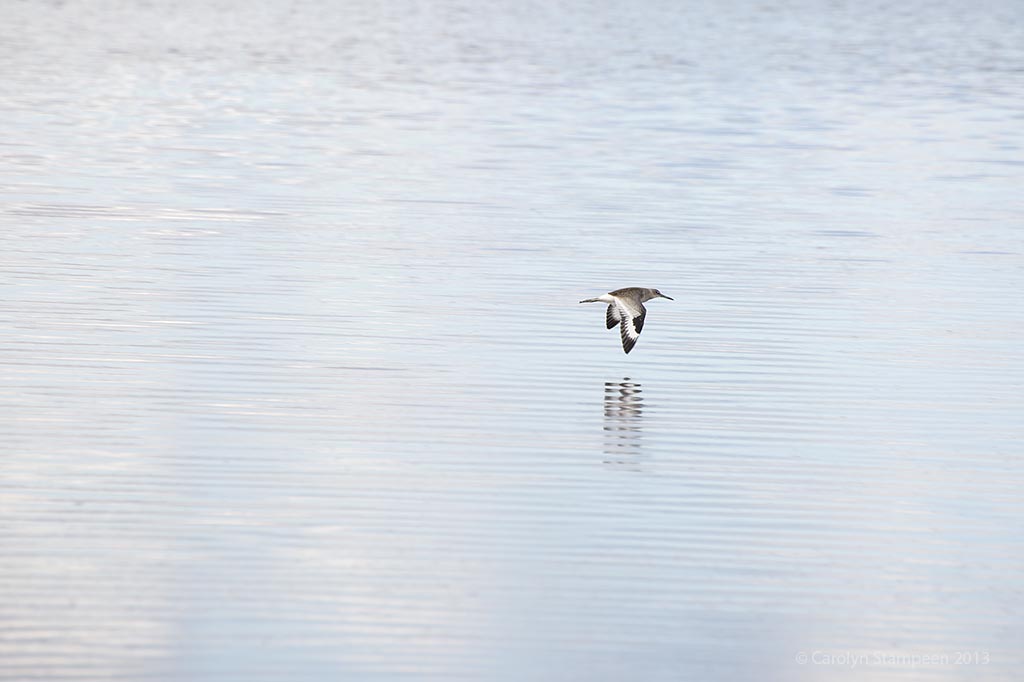 A willet flies by – pay attention to your DOF (depth of field) and shutter speed. I am constantly changing my settings depending on where I am pointing and generally try to make a practice of setting my camera for fast shooting when I am not specifically pointing it at something that is happy with slower settings, so that I am ready for unexpected fly-bys. Even being fast changing your camera’s ISO setting is a very useful skill.  If you can’t change your camera’s settings without taking the camera from your eye and looking at that back screen, then practice! This yellowlegs is sticking to the waterline. This species tends to be cautious in this area and are more wary than some others. This one was well aware of me and wasn’t sure what to make of the camera clicks, but was comfortable enough with me that it went about its business … until… Many birds walk right around me on the beach; most, as this one did, would run by when they were straight ahead of where I was facing but would then relax again when on either side. 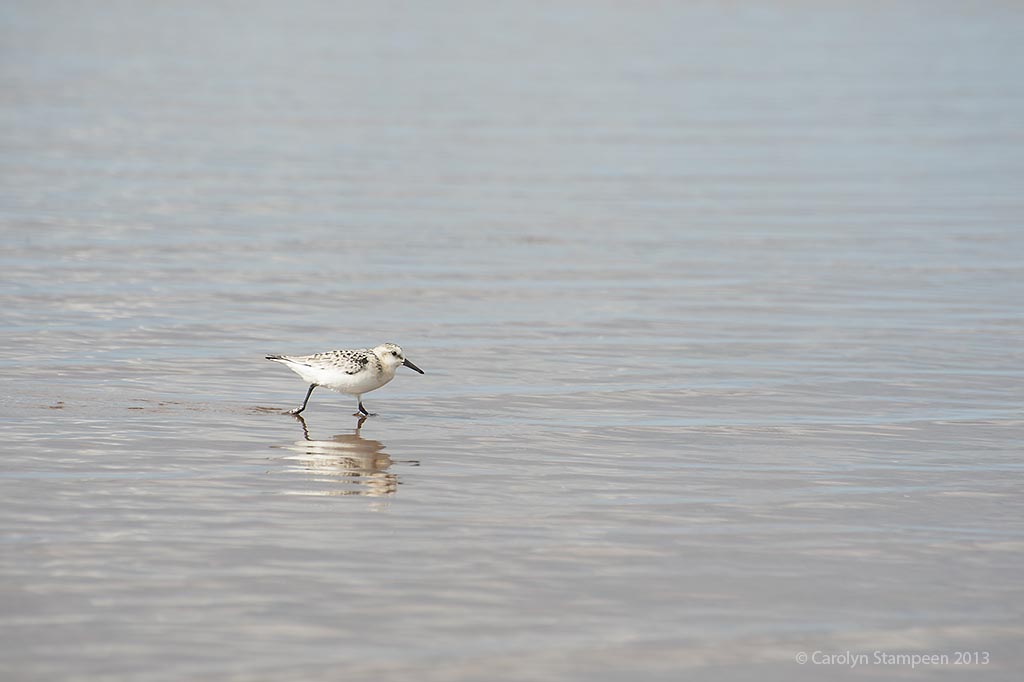 Sanderlings are often comfortable ignoring quiet humans on the beach. A dilemma is often that they move too quickly and get too close, which offers is own challenges when shooting — pay attention to your shutter speed and if they get inside your camera’s minimum focus distance, enjoy the moment! When one of a group gets startled, though, often the entire local flock takes flight, as shown in the first image of this post. I never managed to be on the beach before these birds showed up, so wasn’t able to get very close — these birds were extremely wary. This was the first time I had seen black-bellied plovers on this beach, which was thrilling enough.  Maybe next year… What’s a beach without gulls? This beach has ring-billed, herring, black-backed and bonaparte’s gulls. Here, we primarily see ring-billed gulls. If you are on a beach that has a rocky part, watch the gull’s behaviour there — they will fly over the rocks to drop shelled critters, allowing the rocks to open up a feast for them. 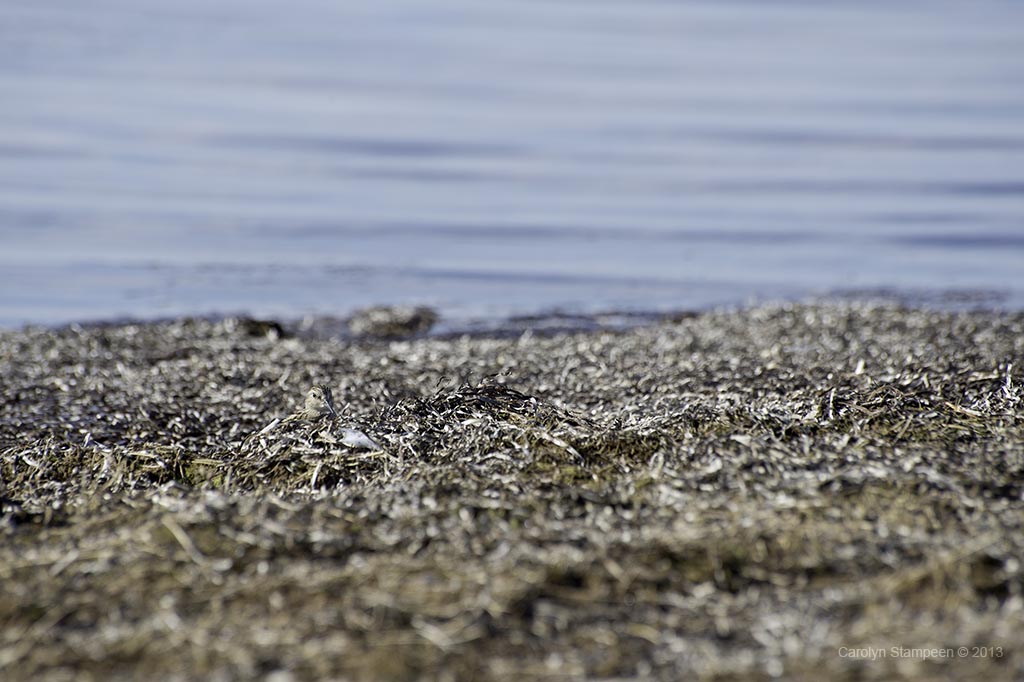 Here, a semipalmated sandpiper is taking a break from foraging by settling into a nest of seaweed on the beach. Sitting on a beach, playing observer, is a great way to start learning the behaviour of possible subjects. If you can’t see the bird in this image, look for a little head poking up about a third of the way in from the left. I’ve been surprised a few times while walking along the beach – though I guess the surprise was mutual. You might also notice birds laying on or beside clumps of mud on the beach. A Least sandpiper forages on the beach. The bright orange beaks and legs and distinctive black neck band of semipalmated plovers add little splashes of colour on beaches as they wander over mudflats. I’ve seen over 60 great blue herons at one time along the waterline in August as the tide goes out or is coming in. In this area, the herons are quite timid, so one either needs a very long lens to get close, plan to use the herons as part of the landscape, or know whether the water is going in or out to plan a very slow and stealthy approach for closer shots. If you try the latter, plan to take your time, move very slowly, try to not change your profile as you move: your silhouette should not be seen changing shape. As soon as it does, you’ll have an opportunity to catch a heron in flight. 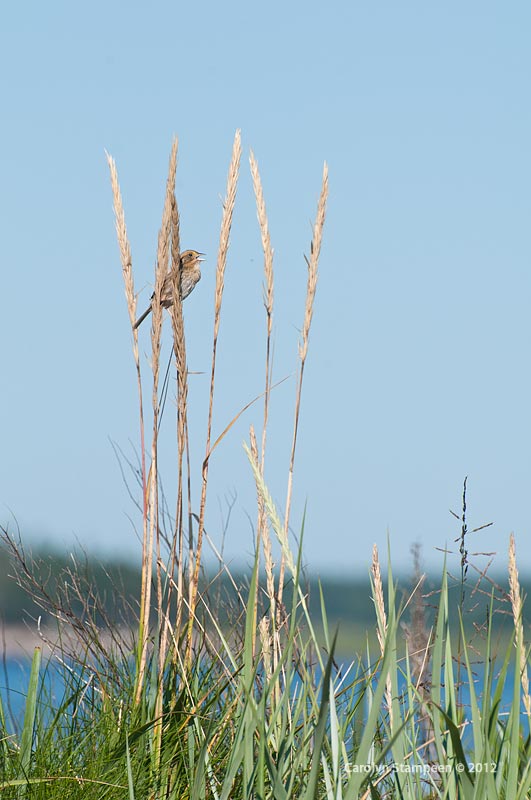 I’m including a shot of a sparrow I took last year to underline the usefulness of having a bird reference at hand. On “my” beach, there isn’t a lot of beach available at high tide, so one day I wandered to the salt water marsh that is along the beach. Many birds locate there during high tide, so I was curious about what I might see. As I was sitting and watching, a sparrow hopped up on a branch, opened its mouth — and hissed! Another one hopped up on the top of some grass nearby and hissed back. I had never heard this before and was able to shoot off a few photos to try to identify what they might be. I find many sparrows challenging to identify, and from this image, had it narrowed down to what I thought were 3 possibilities based on location and colour. But even a birdwatcher friend wasn’t able to nail it. However…in this new world, we now have bird guides that include song. When I played through the audio on my Peterson’s App, it was instantly apparent that I had a bunch of Nelson’s sharp-tailed sparrows for neighbours!

This entry was posted in Beach and tagged Northumberland Straight, Nova Scotia, Nova Scotia Tourist Destinations, What to see in Nova Scotia. Bookmark the permalink.

One Response to Birds on Nova Scotia Beaches