Our first view of the Black Rock Lighthouse was from the Harbourville beach. I almost overlooked it as I took in the nearby cliffs and looked back into the harbour, which was higher than where I was standing and where fishing boats were sitting on mud, rocks and shells. If the fellow were sitting on my shoulders, we would still both be underwater when that tide came in — just an amazing thought. But then, as I continued to surveil the area, I saw it: off behind distant rocks on a point of land, the stark white colour contrasting with the blue clouds of the oncoming night, a lighthouse! Of course, we had to go take a closer look!

We went the next day, a day that started off with rain that made the fellow want to write the day off. But stormy clouds on coastline?  He needed an education!  As the rain turned into fog, even he started appreciating the magic.  There were moments when I thought the sun would burn the fog away before we got to Black Rock beach, where this lighthouse lives, but then the fog would move back in with more determination. This was our first glimpse of the lighthouse close up…see it? In the upper lefthand corner of the image, hiding in the white fog. Here it is again, after the fog thinned a little bit.

The lighthouse here was established in 1848 and was originally a square wooden building in which the lighthouse keeper lived, with the light tower being a 3-sided bow window. The lighthouse we see now is a 10.4 meter white cylindrical fiberglass tower that replaced the original lighthouse in 1967. The stripe patterns of lighthouses help distinguish them from each other from a distance, helping sailors and fishermen know what they are looking at from off shore. It was bright and sunny up on the road. It even seemed as if the sun might burn off the fog. The fog, however, had other ideas.

When we got to the beach itself, it was hot and sunny where we parked the car. The fog was coming in waves. It would thin for a bit, then would be so thick that we couldn’t see very far down the shoreline: the rocks would just merge with the whiteness. Looking out into the Bay of Fundy was like looking into a wall of white.

Walking from the top of the beach down to the waterline was like walking into air conditioning.  The sun was shining and hot on the car: the bottom of the beach was enveloped by the coolness of the fog that was fighting with the sun for victory. It was an amazing experience to sit on the warm rocks and watch the shoreline come in and out of focus as the tide came in, causing more of the shoreline to disappear. You can take your bright, sunny days! 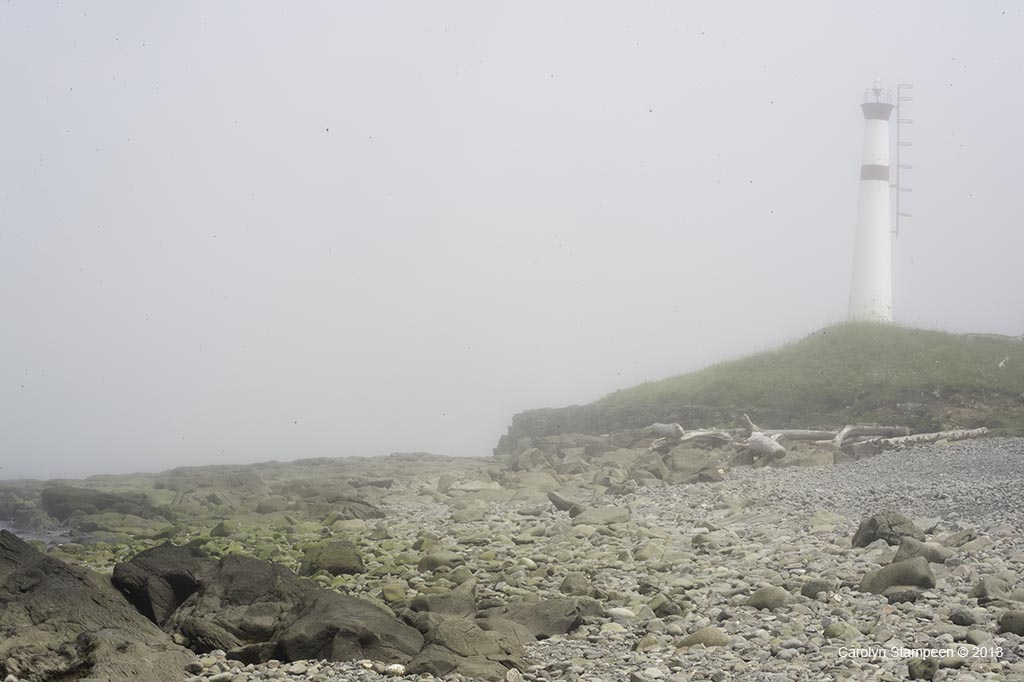 Down on the beach. The tide is coming in and soon where I am standing for this shot will be covered with water. This is the amazing rock formation at the foot of the lighthouse. What an amazing place to sit and enjoy being on a coast. Of course, during high tide, this might be a bit soggy. This is the view looking to the right of the lighthouse. At times, those trees were invisible. The fog lifted a little bit and I thought I saw some more buoys. But then, out of the wall of white, completely silent, came this procession of Common Eiders (I believe). The eiders return to breeding grounds in April, then the males and non-breeding birds move to the southwestern part of the province for the summer. These appear to be non-breeding males – male eiders don’t breed before they are three. The long procession swam out of the fog, then disappeared back into it, as if they were part of it.

You may also be interested in our Harbourville Nova Scotia travel video. 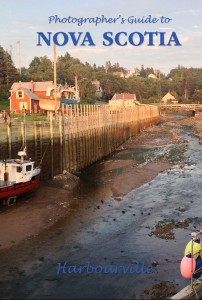 This entry was posted in Beach, Birds, Lighthouse and tagged Black Rock, Nova Scotia Tourist Destinations, Where to go in Nova Scotia. Bookmark the permalink.