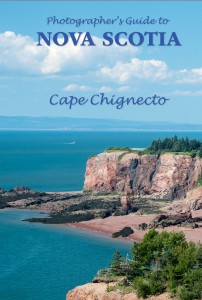 You may also want to check out our other post, which is a video of the hike to The Three Sisters, Cape Chignecto, an amazing area for hiking that’s vastly under utilized and often overlooked.

We also have a Cape Chignecto Nova Scotia travel video. While we’ve driven by it on our way to one of our favourite restaurants in Nova Scotia (at Cap D’Or), we’ve never stopped to visit.  Or, I haven’t; Blair apparently had been there with his uncle on motorbikes when he was young, but didn’t remember the area.  So … it was time.

Cape Chignecto is the largest provincial park in Nova Scotia and was opened in 1998. It has amazing trails along breathtakingly scenic coastlines along the Bay of Fundy and hikers can camp or make day trips.  We planned for the latter, heading to the Eatonville day use side, with a gorgeous trail that wrapped along cliffs,  pausing for a number of scenic look-offs. 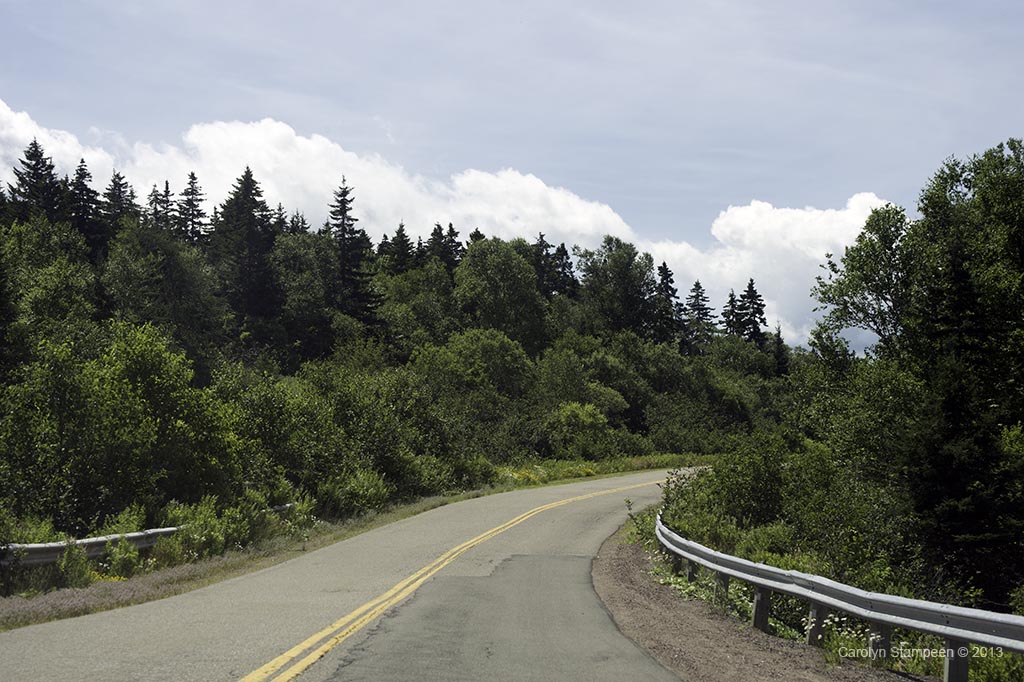 “Look, mom, no power lines to ruin my shots!”

This is an area in which you will want to make sure that you have filled up your gas tank before you leave. There will be a long while when you don’t even see power lines, let alone gas stations and not far past Apple River, you’ll find pavement gives way to dirt roads! And don’t count on cell phone reception. Nothing too scary for our far-from-off-road vehicle — until, that is, we hit the flooded part of the road.  We stopped, got out, took a look, then decided, ‘what the heck, it didn’t look too bad.’  If it had been half an hour earlier, we may have reconsidered (waters would have been higher), but the water levels seemed manageable when we timed it and we had driven for so long on the dirt road that we felt it would have been a waste if we didn’t see what was on the other side. The Bay of Fundy is to the right of us in the above shot; a salt-water marsh is to the left.  When the tides are high,  this road floods.

As soon as we came over the crest of the hill and saw Spicer’s Cove below us, we knew we had made the right decision to plough through the flooded road. And when we started walking the trail in the park, we knew it was going to be an amazing day.

So dirt roads and hiking – was this a challenging day? Not really.  Most of the dirt road was in pretty good shape. If you want to visit but are shy of drving through water, check tide times before you leave — you’ll want to hit this area at least an hour after high tide. On our return trip, closer to low tide, the road was completely dry and showed no signs of having been flooded. There were a few places where the gravel on the road was pretty big rocks and a little care is warranted, but we were driving a car that was definitely not one that is rough-road-worthy and we managed without much stress. The hike itself was on a very well-managed trail and was about 2.4 km to the end.  The look-offs make it very well-paced.  We had a variety of fitness levels between us and we also had a lot of camera gear — neither felt like we were pushing ourselves. There is a longer day hike here as well, marked on the map, if you have more time and want to see more of the coastline.  When looking at the photos of Anderson’s Cove below, you’ll see one of the fenced look-offs of this extended hike. Was it worth it the drive?  Absolutely! Passing through West Apple River, we see the harbour and the distant Cape Capstan lighthouse. By the time we pass this way again, the water will be gone! The drive to Chignecto Head is very picturesque. There are times when all you see are trees, but then you break over the crest of a hill or start hugging the coastline and you see the beauty and charm of the Atlantic shoreline. Oh, yes, we did. We drove the little sports car through this flooded dirt road! We can see by the wet areas on either side of this “puddle” that the flooding had been more extensive not too far from the time we crossed. It turns out that the road floods during high tide. The tide has begun going out, so we timed it when the road was something that we felt confident passing. When we crested this hill and saw Spicer’s Bay below us, we knew that the dirt roads and flooded roads had been worth it! The tide has been starting to move out, but this is not far from high tide. 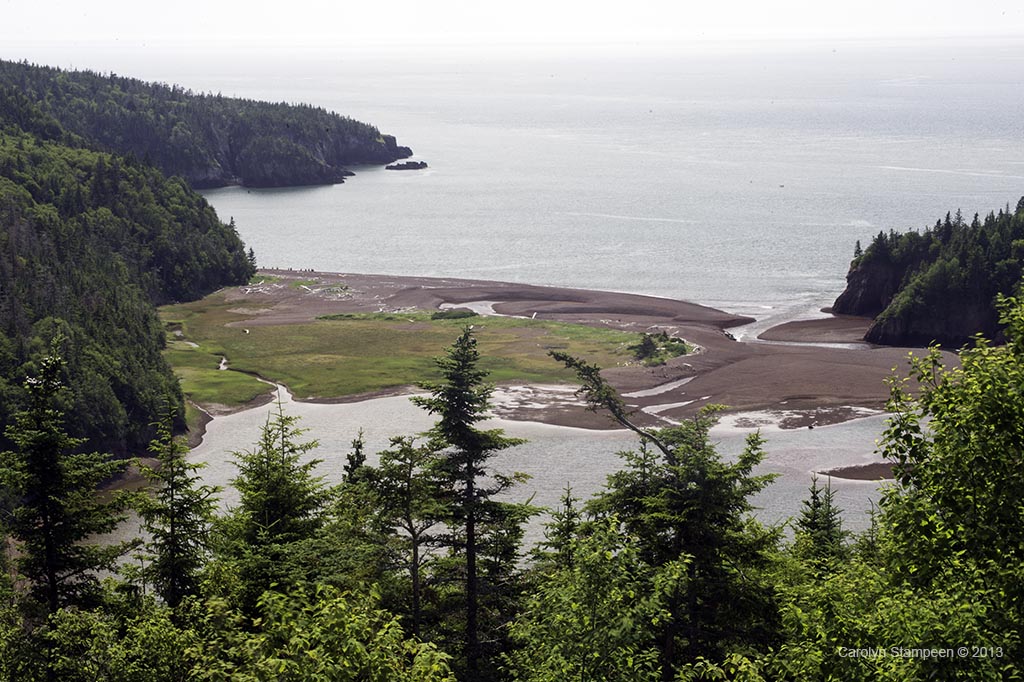 This is the view from the platform at the Eatonville Interpretative Center (which is closed at this time, not sure for how long). There is a line of people along the beach in the upper left — they are about to get into kayaks to paddle the coastline. 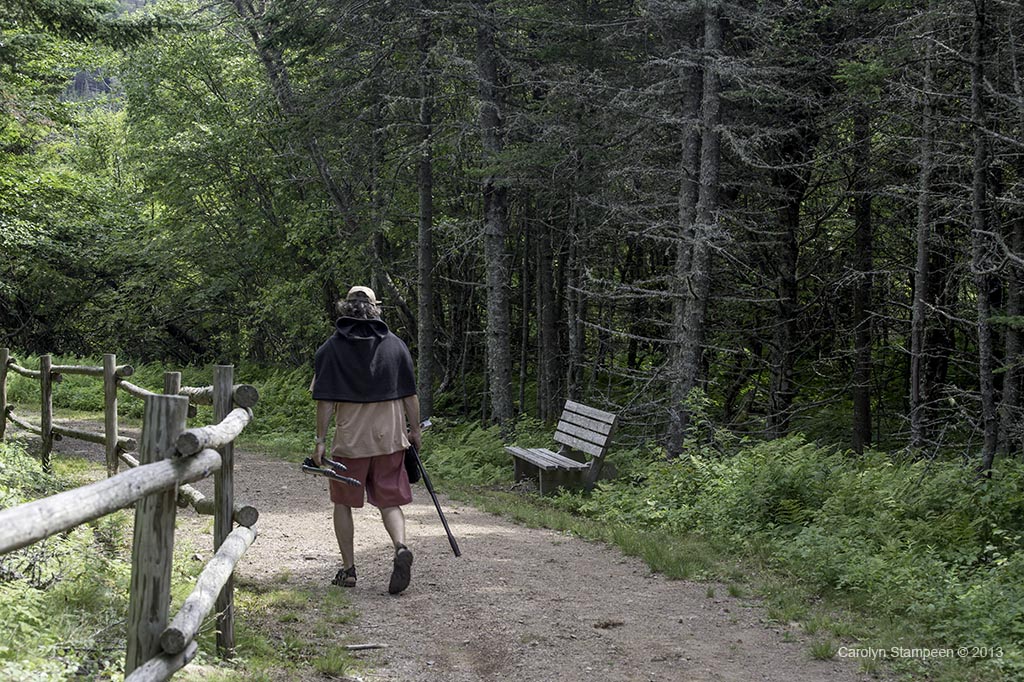 This trail is very well maintained. Half-way down there are bathrooms that are large, bright and clean. The kayakers we had seen beginning their trip have now reached Anderson Cove, the view rom the first look-off along our hike.

This is a sea stack. The powerful tides of the Bay of Funday first cause erosion in points of land, eventually making holes. An archway develops, which over time erodes further until the arch drops away and pillars of rock remain. 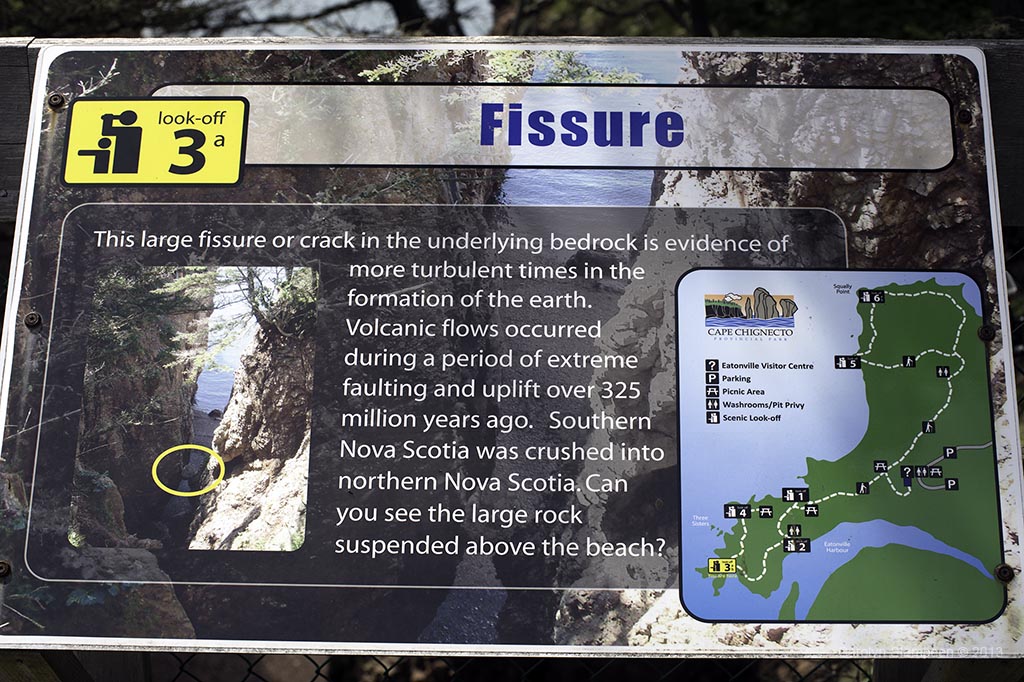 Each official look-off provides descriptions of points of interest. If you look at the map to the right, you’ll see the loop we are hiking at the bottom left corner of the map, with our current stop well marked. Each look-off station also has a bench handy, should you like to sit and enjoy the view for a while. Old man’s beard: seeing so much of this stuff hanging from dead or dying trees echoes what your lungs will be telling you. This type of lichen is very sensitive to air pollution, so seeing it so long and everywhere is an indication that the air is very clean. Take lots of deep breaths. It is not only very clean but it smells amazing. Here is another look at Anderson’s Cove as we head out of the park. The tide is well on the way out. That water in Spicer’s Cove? Compare this empty expanse to the ribbon of beach that was visible when we first arrived. 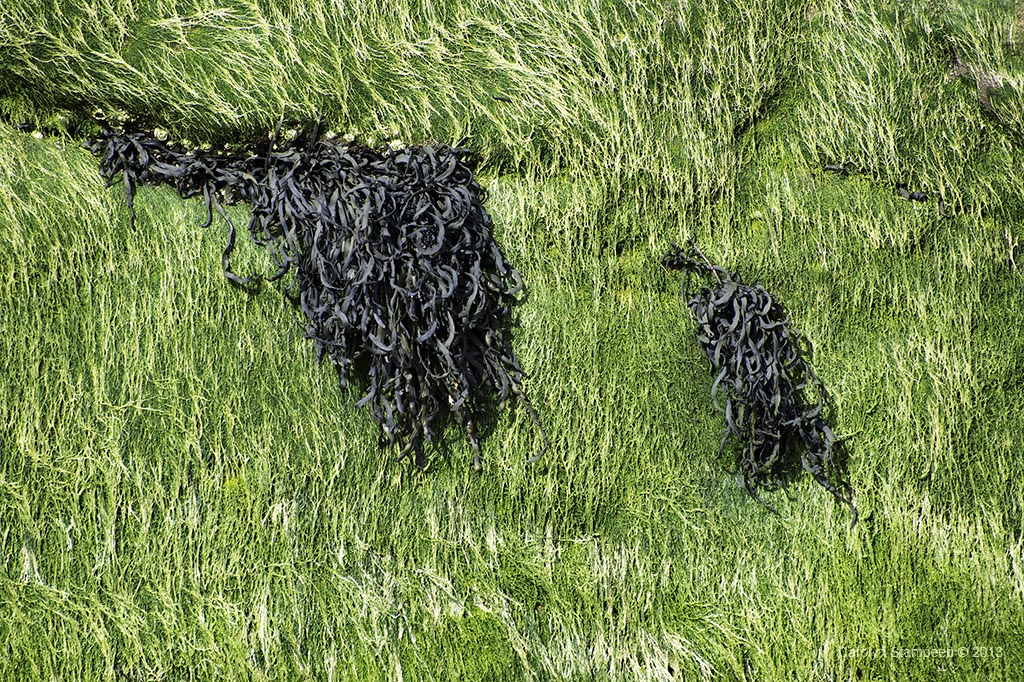 Different types of seaweed mixed together look like art. 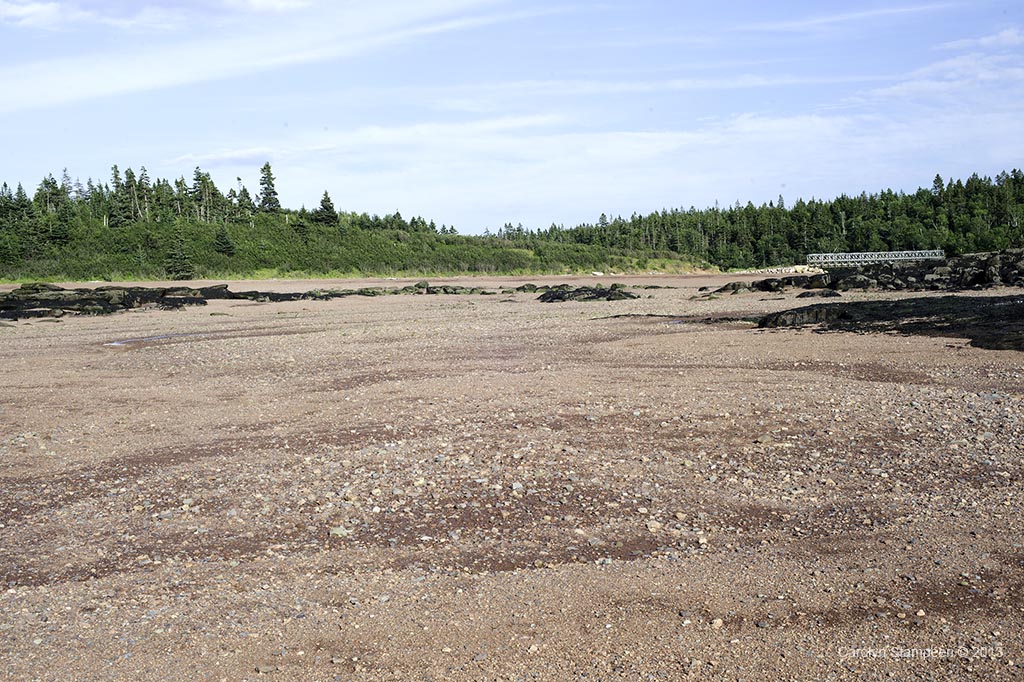 From this vantage point looking back at the road, I am still not at the waterline. When I did get to the edge of the water, I paid careful attention to the gently lapping waves. When the tide starts to come in, it is very obvious, and while you always want to be careful about tides, Fundy tides warrant an extra degree of wariness — they come in faster here than anywhere else in the world and you don’t want to mess with them. That lighthouse that we passed as we drove through West Apple River? This is what the harbour looked liked as we passed again. The water has begun to return, but most of the floor is still empty, looking like an amazing piece of artwork with the crisscrossing patterns left by the receding water painted in the sand.

This entry was posted in Beach, Hike and tagged Cape Chignecto, Nova Scotia Tourist Destinations, Where to go in Nova Scotia. Bookmark the permalink.