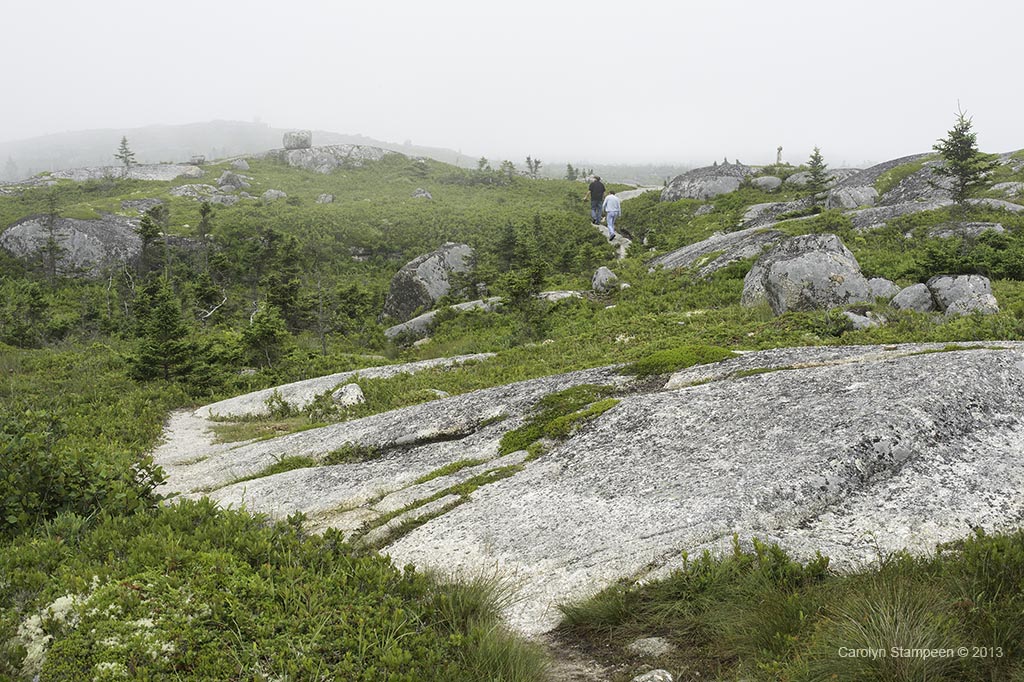 When a glacier moves through an area, magic can happen.  Or at least that’s how I see it. The Peggy’s Cove area offers more than a lighthouse and a picturesque fishing village.  The surrounding area is otherworldly, a mixture of peat, black spruce, boulders, and hardy plant life such as juniper, crowberry and pitcher plants. Boulders can be seen to be resting on hilltops, on other rocks, or in the middle of a peat field, where an ice field dropped them about 20,000 years ago. Lichen grows on stone surfaces, adding colour to the shades of grey of the granite.

Our local friend, Darryl, took us along a hiking trail towards Polly’s Cove, not far from Peggy’s Cove.  There is parking, though limited.  Walking on this terrain isn’t too difficult, for the most part.  Be prepared for a wet walk along parts of the trail, especially if there has been recent rain.  If you plan on climbing down to the shore, be prepared for more in the way of exertion.

The day we wandered out onto “the barrens,” as Darryl calls the terrain, was foggy, adding to the mystery of the area. The air was amazing. I really love this part of the planet. Sometimes you need people in a landscape to properly show scale. 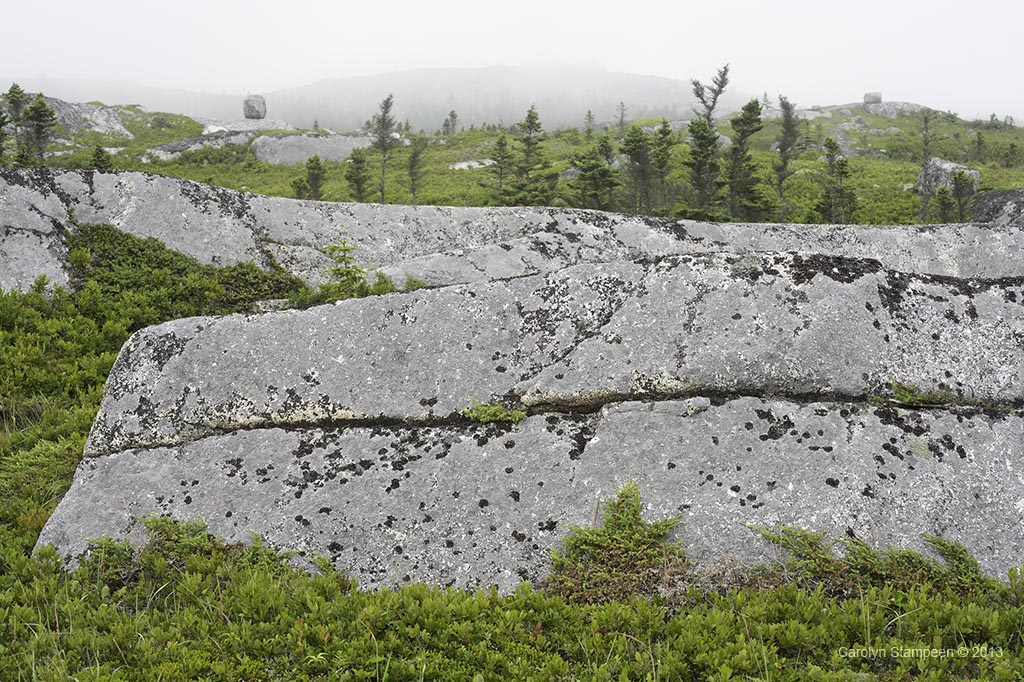 A large granite boulder sporting some fashionable lichen stands sentinel over Polly’s Cove. In the distance, we can see a hiker walking the rocks jutting out into the bay.  Off to the right, if there had been no fog, is apparently a view of the Peggy’s Cove lighthouse. Looking down into Polly’s Cove, to the left. On the other side of the rocks is ocean. Polly’s Cove has a small sandy beach that is apparently popular to divers. Its easy access to the water and the sheltered waters make it attractive to swimmers and divers of all levels. There is a wreck to investigate as well as a variety of sea life. And if you’ve been wanting to refresh your stubby collection, apparently you can satisfy this here as well. A vein of quartz! 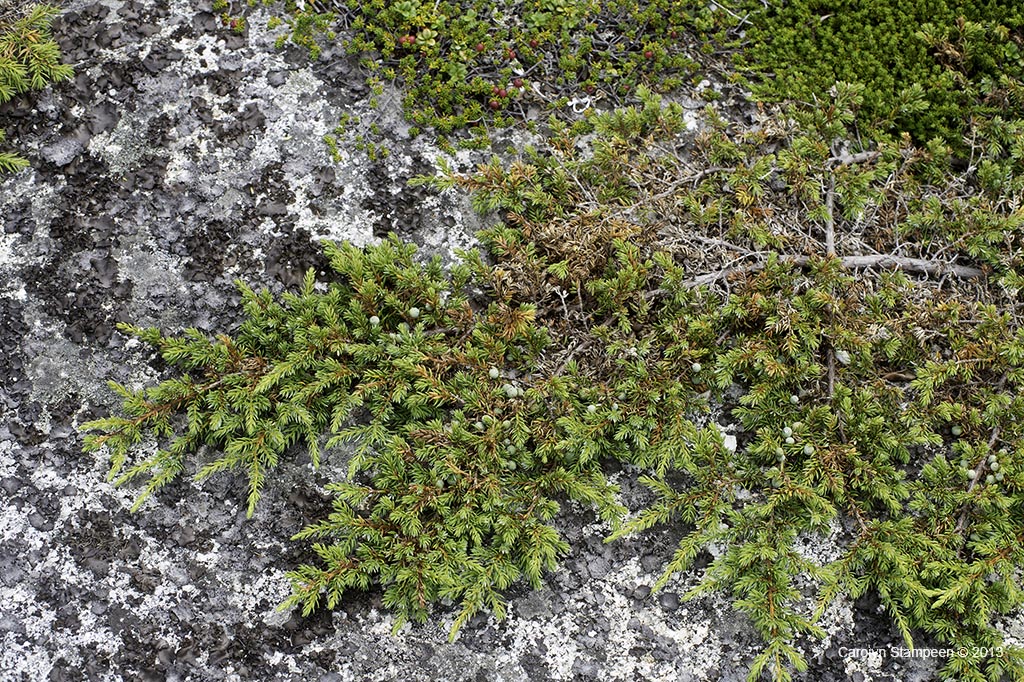 Juniper is a hardy plant that seems to thrive in the salt air and rugged coastline, and it adds to the amazing scent in the air. 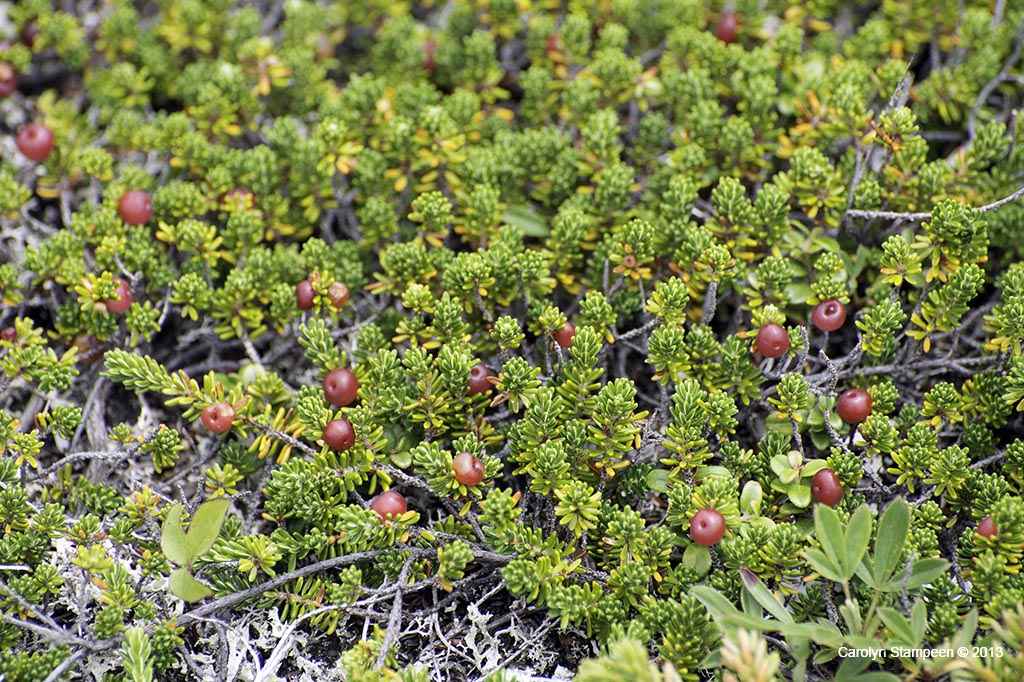 Northern pitcher plant. This is a carnivorous plant that makes up for the lack of nutrients in the soil in which it grows by digesting insects that get trapped in the water of the pitcher, found at the base of the plant.

The landscape looks almost otherworldly. In the fall, these fields turn an outrageous red, as my friend Darryl has documented. This boulder sits where it was left as it was carried by an ice flow over the region, sometime around 20,000 years ago.