Partridge Island isn’t really an island – anymore. It’s joined to the mainland by a long narrow gravel road surrounded by beach and marsh. This isthmus was apparently created during the Saxby Gale of 1869. It’s wider during low tide and contracts during high.

In the age of tall ships, many of the quiet coastal communities in this region were once bustling with shipping activity, tall ships coming from all over the world to trade with and supply the growing province — and continent. The village of Partridge Island was established in the 1770s and was a thriving community until the mid 1800s, when politics resulted in the settlement being shifted to the nearby Parrsboro. Today, the historic Ottawa House By-the-Sea Museum, the residence of a prominent businessman of the original village, which was then bought by Sir Charles Tupper, remains. Partridge Island itself is a now a destination for hikers, rock and fossil hunters, photographers, and those who just want to sit on a marvellous stony beach and maybe take a dip. 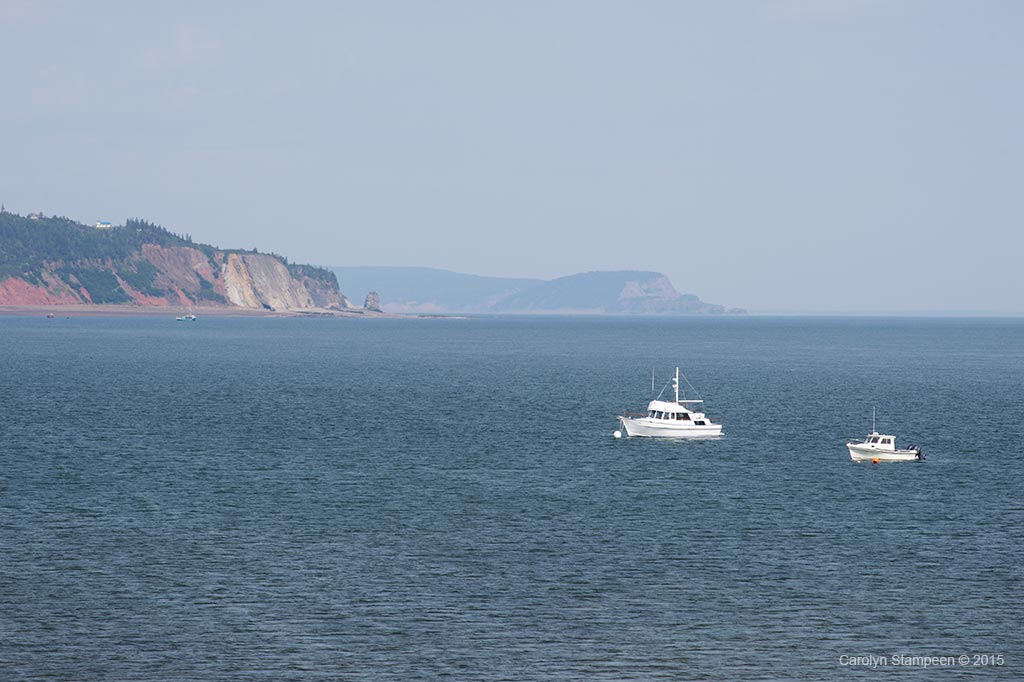 The first time I visited here and was walking along the beach, a hissing sound caught my attention. As I walked to the water to investigate from where the sound was coming, I saw a long line of bubbles in the water, running parallel to the beach.  It was fascinating.  When the tide goes out, the basalt rock takes in air; as the tide comes back in, the air is released. Mi’kmak legend says that the god Glooscap’s grandmother lives on the island and one of their references to the island calls it “Glooscap’s grandmother’s cooking pot” because the water can seem to boil twice a day.

Cape Split and Cap D’Or serve as the entrance to the Minas Basin, in which the highest tides in the world as well as on the bay have been recorded. Partridge Island is right across from Cape Blomidon, and this point is a “shortcut” from one side of the basin to the other. Important to the native population, Partridge Island also became important to the Europeans.  In the 1730s, there was a ferry service that operated here. During the American Revolution, the ferry was captured as a strategic piece during the raiding of a fort near Amherst.  A reward for hiking the trail and making it to the end is not only a fabulous view, but an interpretative sign showing what can be seen as well as what could have been witnessed of historical moments from the past from this island. As well as a rich human history silently swirling around this beautiful area, this is also a popular place for folks who love geology.  In early times, it was an important place for Mi’kmaq to find amethyst and it’s still popular among rockhounds.

Nova Scotia contains rocks from all the geological time periods, and important fossil finds have been made here, even those of dinosaurs! The force of the Fundy tides are constantly revealing pages in our geological history.  Do note that if you are a seeker and find, you need to know the laws. Finds need to be reported and taken to a museum for study.

As always, when walking along a coastal region, know the tides! Especially along the Bay of Fundy and most especially along this part of the bay. Tides can come in very quickly and one can find oneself cut off from safe egress if not paying attention. Don’t mess with Mother Nature, because she is on her inflexible timetable and doesn’t give a hoot about yours. Really. Particularly if you are an inlander, not familiar with tides, this can’t be stated strongly enough. 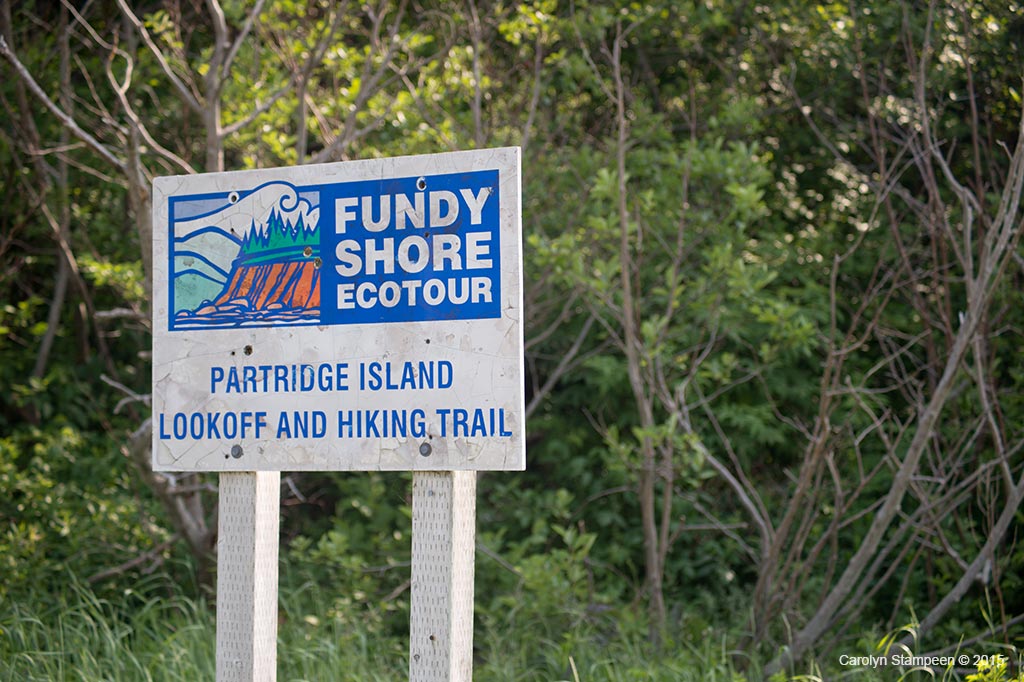 As for the hike on the island itself? It’s “only” 3 km round-trip.  The caveat is that you need to know that the first part of the trail is very steep and you’ll be going uphill for at least the first half before things level off for a bit. I will admit to being in the worst shape of my life when I decided that this was how I was going to spend my day, and I was lugging my heavy camera bag and tripod. I didn’t bring water — bring water! I was wearing sturdy walking shoes — wear sturdy walking shoes! But having said that, it’s not a race.  If you commit to just enjoying the walk at your own pace and take advantage of periodic benches at places to enjoy the view, it is a lovely hike.  The air smells wonderful, the bird sounds are magic, the glimpses out on the bay are grand.  The trail ends with a gazebo, a view and interpretive signs. Take along some binoculars so you can identify some of the places mentioned on the interpretive sign greeting you.  I was there on a very hazy day, but Cape Split was visible; the tide was on its way in, but with a way to go, so I could still see the rock formations on the beach. The trip back down is easy, and you’ll feel entitled to an ice cream from the Ottawa House, which is worthy of exploration on its own, or a chowder from a cute little place in Parrsboro. 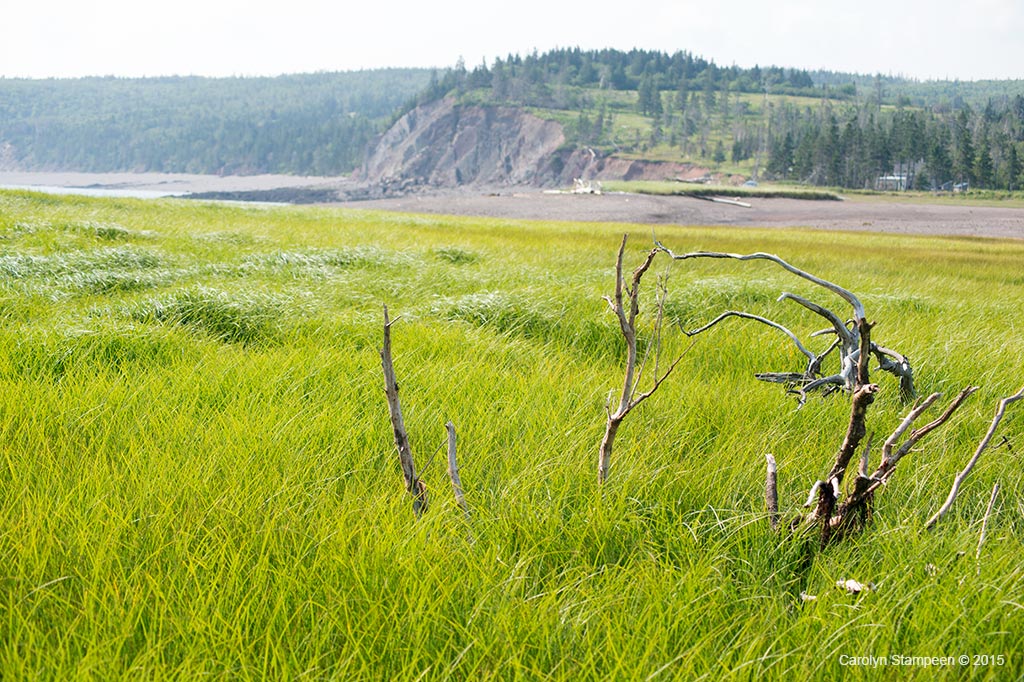 A future blog post will talk about the Ottawa House in more detail, but do stop by, if only to enjoy the view and take a look at more interpretive signs talking about the history and geology of the area.  It’s fascinating.  Inside the Ottawa House is a look back on times gone by and it’s worth some time to explore. You’re here, after all, so make the most of it!

Partridge island can be found by following the Whitehall Road out of the town of Parrsboro. A dirt road beside Ottawa House takes one down to the beach and a gravel road. How far you are comfortable driving depends on you and your vehicle, but even very off-road-NOT-worthy cars are safe without worry for at least half of the drive to Partridge Island.